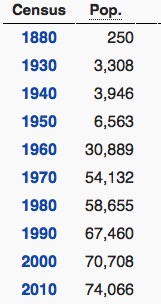 Mountain View is a city located in Santa Clara County, California, United States, named for its views of the Santa Cruz Mountains. The table shows the population of the city. The source is U.S. Decennial Census data from Wikipedia.

During what decade was the rate of population growth the largest?