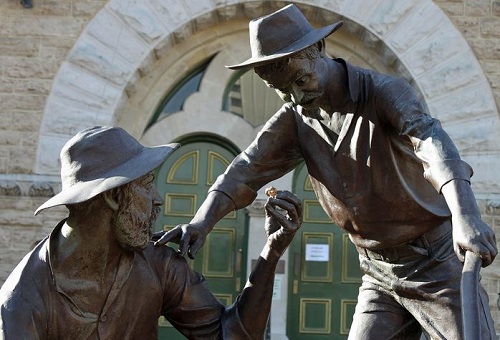 In a scene from a film, the baddy is sharing the ill gotten gains with his (comically stupid) henchman by dividing the gold pieces into two 'equal' piles.
'That’s one for you, and that’s one for me'.
'That’s two for you (puts an additional one on the henchman’s pile), and two for me (puts an additional two on his own pile)'.
'That’s three for you (adds one to the henchman’s pile), and three for me (puts three more on his own pile)'.

How many times more pieces of gold does the baddy get?

Leslie Green suggested the problem for Aplusclick project. This theme has been repeated at least once. An early version was with Bugs Bunny, 'Racketeer Rabbit' (1946).